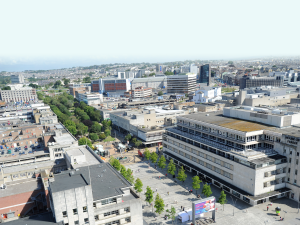 Plymouth is reinventing itself for the internet age.

As shoppers turn their backs on bricks-and-mortar stores, towns and cities across the country are witnessing the death of the High Street.

Now the Westcountry’s biggest city has grasped the nettle. The city is aiming to turn itself into a place to live and play and not just a shopping centre.

The city council is making a big push to bring permanent homes back into the centre, in purpose-built apartment blocks and above shops – and to provide them with parks, fun and entertainment.

Mark Lowry, the council’s Cabinet member for finance, said: “We all know that city centres across the country are struggling because of the way we are shopping now.
“We have known this was coming for a long while, and as a council and a city we have been very proactive.

“Plymouth city centre is the size of Liverpool’s centre, with a quarter of the population.

“For a long while we’ve been acquiring land and partners to make sure we can make the changes needed to introduce a substantial number of homes.

“The city centre is changing drastically. We can’t just sit back or it will be tumbleweed.”

Developers are flocking to Plymouth as a place to invest. Developments worth £253million are already under way. Projects range from new homes to the cinema and leisure complex on the Bretonside bus station site and the ambitious reinvention of the city museum and art gallery, to be known as The Box.

In the pipeline is another £350million worth of development, including the long-awaited Millbay boulevard and a city centre park.

“What we are trying to do is to create a sense of place,” Cllr Lowry said.

Council assistant director David Draffan, who is overseeing much of the rebirth, said: “City centres have always provided an important social space. The internet doesn’t give that. A place to congregate is the future of the city.”

After a generation or two of migration to the suburbs, Plymouth is betting on a reversal – a move back to the kind of city centre living seen before the Second World War.

Cllr Lowry has asked council officers to look at vacant shops with a view to turning them into homes.

That is in keeping with the vision of David Mackay, the renowned Barcelona architect who was brought in by the city in 2003 to address Plymouth’s shortcomings.
Cllr Chris Penberthy, who represents the central St Peter and the Waterfront ward, has set an example by moving into the centre. He is an enthusiast for city centre living – especially in a city like Plymouth with its waterfront attractions.

When the new Drake Circus leisure complex on the site of the old and rundown Bretonside coach station is complete in December 2019, the offering will be significantly improved.

The British Land development will bring a 12-screen multiplex cinema into the heart of the city along with a range of new restaurants and, crucially, 420 new parking spaces.

This is the high-profile, £45million new cultural centre that is likely to become a destination in its own right.

To call The Box a redevelopment of the old City Museum and Art Gallery is to do it an injustice – it is a bold reimagination of the city’s heritage and history, bound into the centre by a broad piazza and public space.

“This area [The Box] is a catalyst for investment,” Cllr Lowry said. “We are having developers knocking at our door for the first time, as opposed to us going to London and dragging them down here.
“British Land has invested £130million in Plymouth in the past two years. In many cities it is selling off property.”

Meanwhile, Plymouth does still have to wrestle with closed shops and blank windows which are all that is left to remind us of many of the household names of yesterday’s shopping.

A £50million project by developer Thames Bank is forging ahead with the transformation of the old Derrys department store.

Thames Bank director Colin Morris said: “Generations of Plymouth people – and those from wider afield in Devon and Cornwall – have fond memories of trips to Derrys.
“We know they’ll be delighted to see what we have done with the building by preserving the best of its landmark architecture, whilst creating great spaces inside.”

Meanwhile, what became known as the “Mackay Boulevard” is taking shape.

In 2003 architect David Mackay pointed out that the city had become cut off from its waterfront.

The boulevard was his solution to that – and the council has remained true to the vision.

It is already redeveloping Colin Campbell Court in the West End, and this week it has bought the old Toys R Us store – the final obstacles blocking the way of the boulevard.